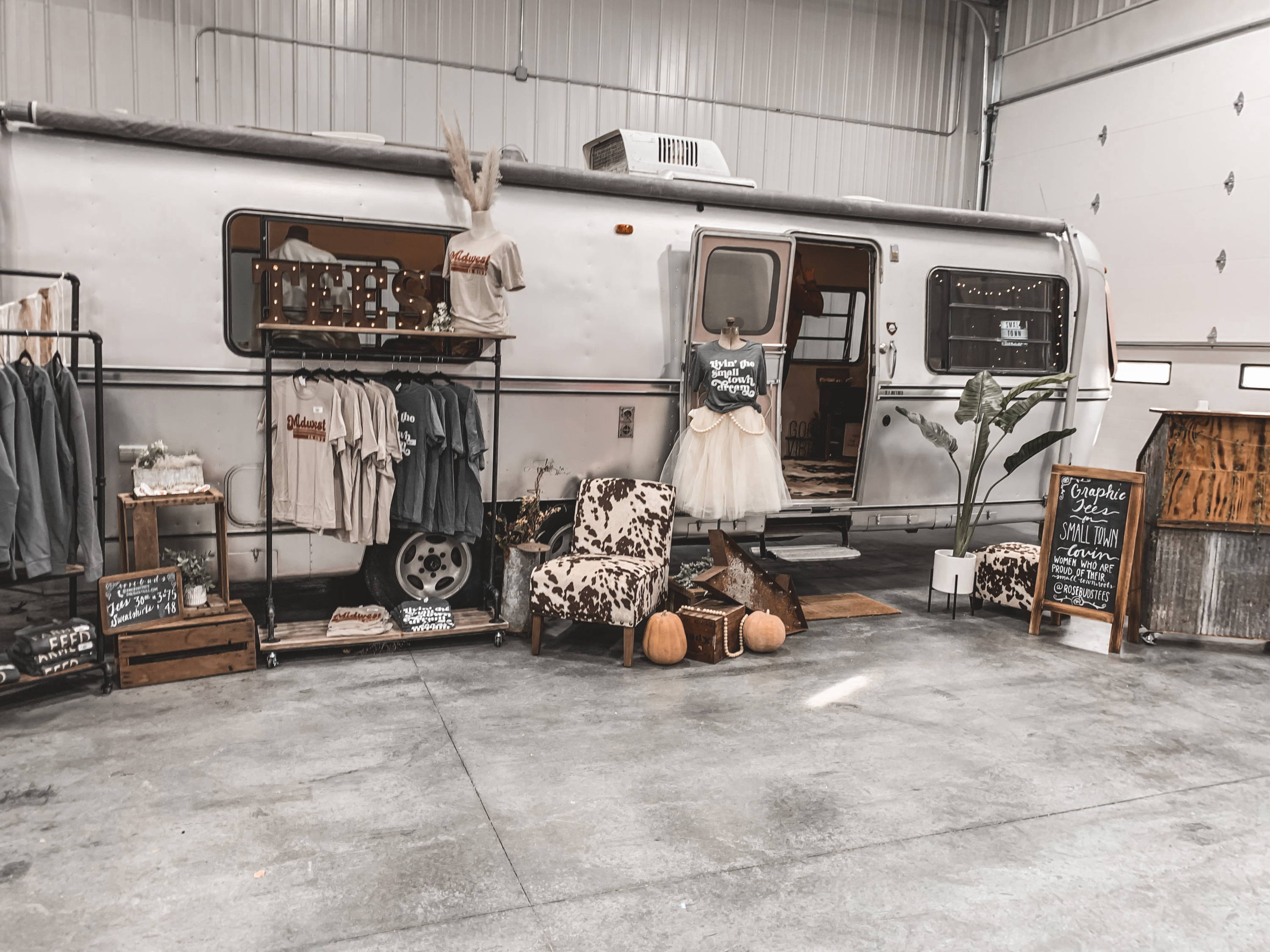 The Journey to Bringing Home a Mobile Boutique...

Before we dive in, you should know that the journey to finding a mobile boutique actually started in September 2019 with a Facebook Marketplace listing.

It was a 1972 Peach and brown aluminum camper. One of the tires was blown out, and the inside was warped from water damage and covered in mold. But that didn't seem to scare my brother or I away.

In fact, we drove back to town, bought a new tire, and headed back out to retrieve the camper. It made it home in one piece (Thank heavens!)

However, I wouldn't have been surprised if it would have collapsed mid trip - and the journey was only about 15 miles.

But BOY was I excited about her! I couldn’t wait to fix her up and take her to allll the markets with my tees.

Fast forward to gutting her, and she was in rougher shape than we thought. She was in need of a 100% rebuild. In fact I’m not quite sure how she was still standing if you want to know the truth. A majority of the supports inside had rotted clear through. They weren’t connected to anything really...

It was a tough pill to swallow but we hauled the Peach Gem off to the junk yard, and I began looking for another camper to take on the road in 2020, RIP "Peachy." 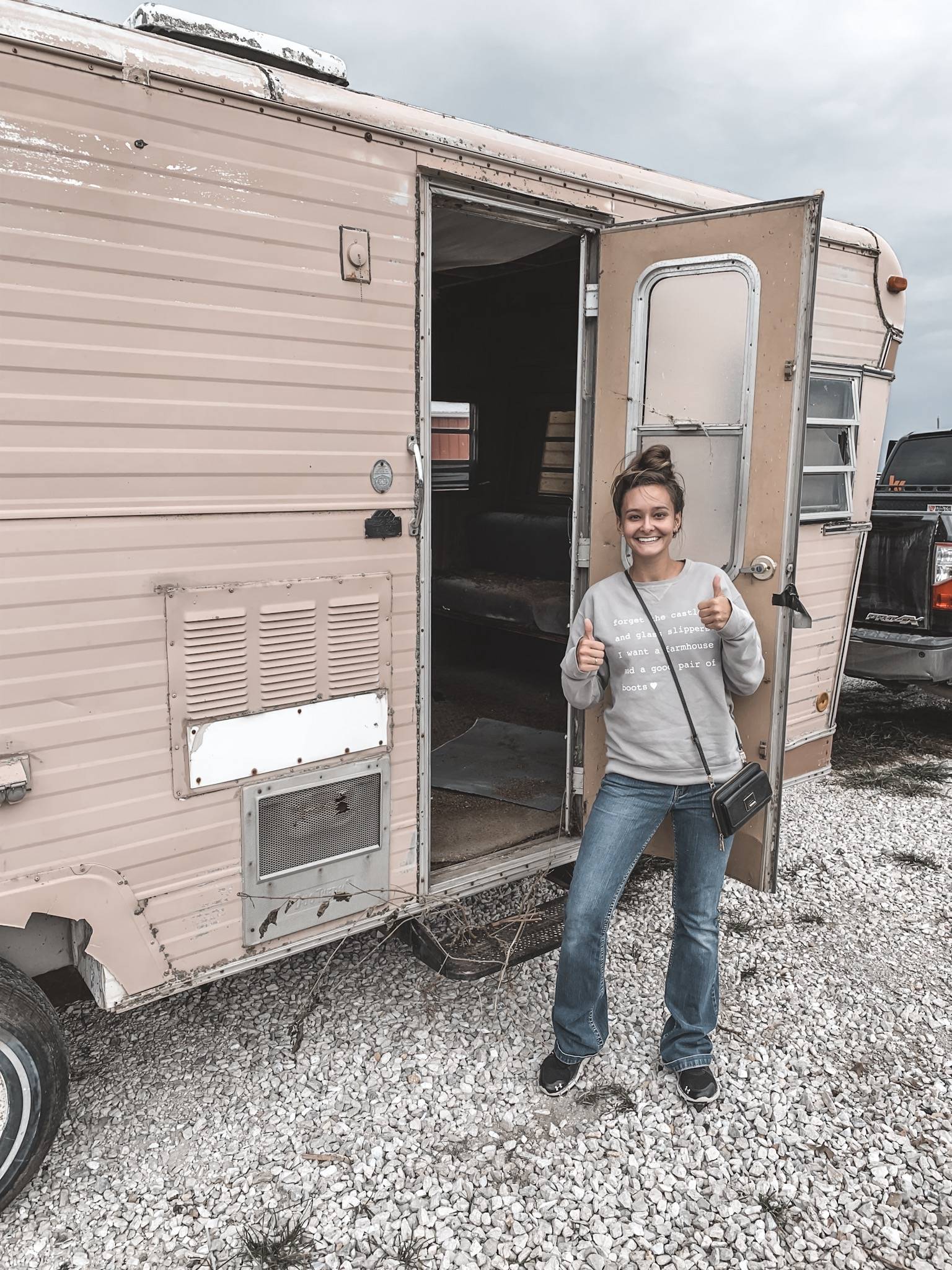 With little time left (two months to be exact) before my first market, I reached out to my buddy (and master of Facebook Marketplace) Paige at @norootsboots for some camper hunting advice.

Well Paige hopped on Facebook marketplace and found a couple of real gems! Two airstreams for sale about 5 hours away. I instantly reached out to the seller and chatted with him most of the day. Let’s call him Dannie.

Dannie was great. He sent me more photos and reassured all my fears. But during that time, one of the airstreams sold.

Of course I felt the urgency, and told Dannie I would make the trip the next morning first thing as long as he promised to hold second airstream for me.

He reassured me he would never sell it out from under someone, and told me to text him when I was on my way.

Whew! It finally felt like things were starting to come together.

Fast forward to the next day at 6 am, I hop in the car and head towards southern Indiana. (But not alone because who buys things off the internet alone?!)

We get 2 hours away from our destination and I give ole Dannie boy a call to let him know when we’ll be there. He doesn’t answer. But he IMMEDIATELY sends a text back. “Can’t sell it to you. It’s on hold. I told you.”

My heart sank. I had come all this way for an airstream that I couldn’t even see. Also, I was furious at Dannie. Reading back over the messages, how was I to know he wasn’t holding it for me? The thought never crossed my mind based on our previous conversations.

Three and a half hours from home, I pulled over to a rest stop to collect my marbles. Half of me wanted to cry - the other half wanted to punch a wall. I couldn’t decide 😂.

We immediately started searching online for other vintage campers in the area. Google. Craigslist. Facebook Marketplace.

We found a promising photo of a 1978 Avion on Craigslist two hours in the opposite direction. So we gave this new guy a call.

“So, John, do you still have this Avion? Are you a camper dealer?” I asked after seeing all of his listings of campers and trailers on Craigslist.

So instead of continuing another 2 hours to Indiana, we turned around and drove 2 hours in the opposite direction to Missouri. Siri lead us straight to this little used camper lot off the side of interstate 44, and well .....the rest is history. Dolly was sitting there among numerous other vintage campers, some better off than others. It didn't take me long to pick her out and hook her up to the truck to haul her home. 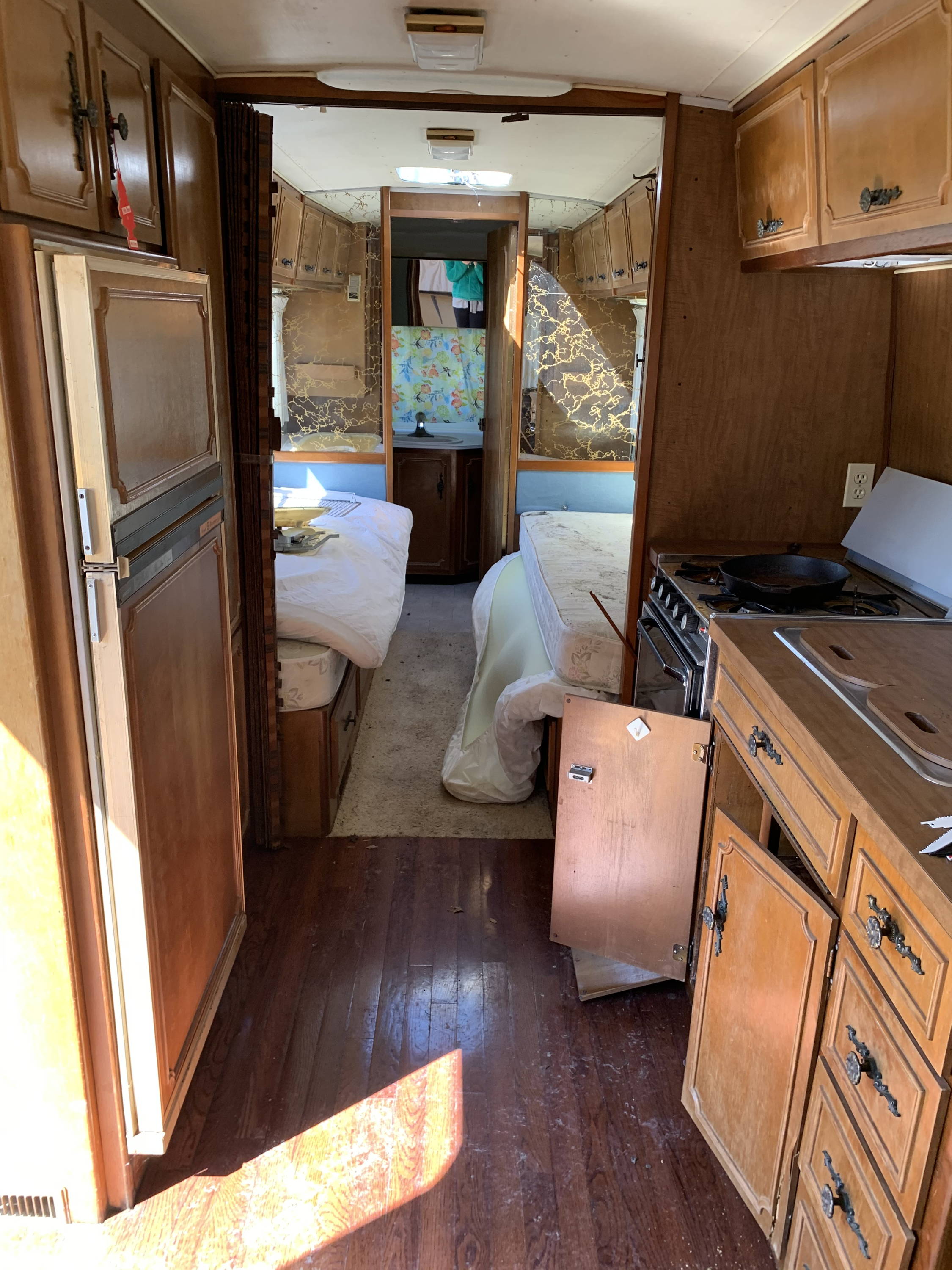 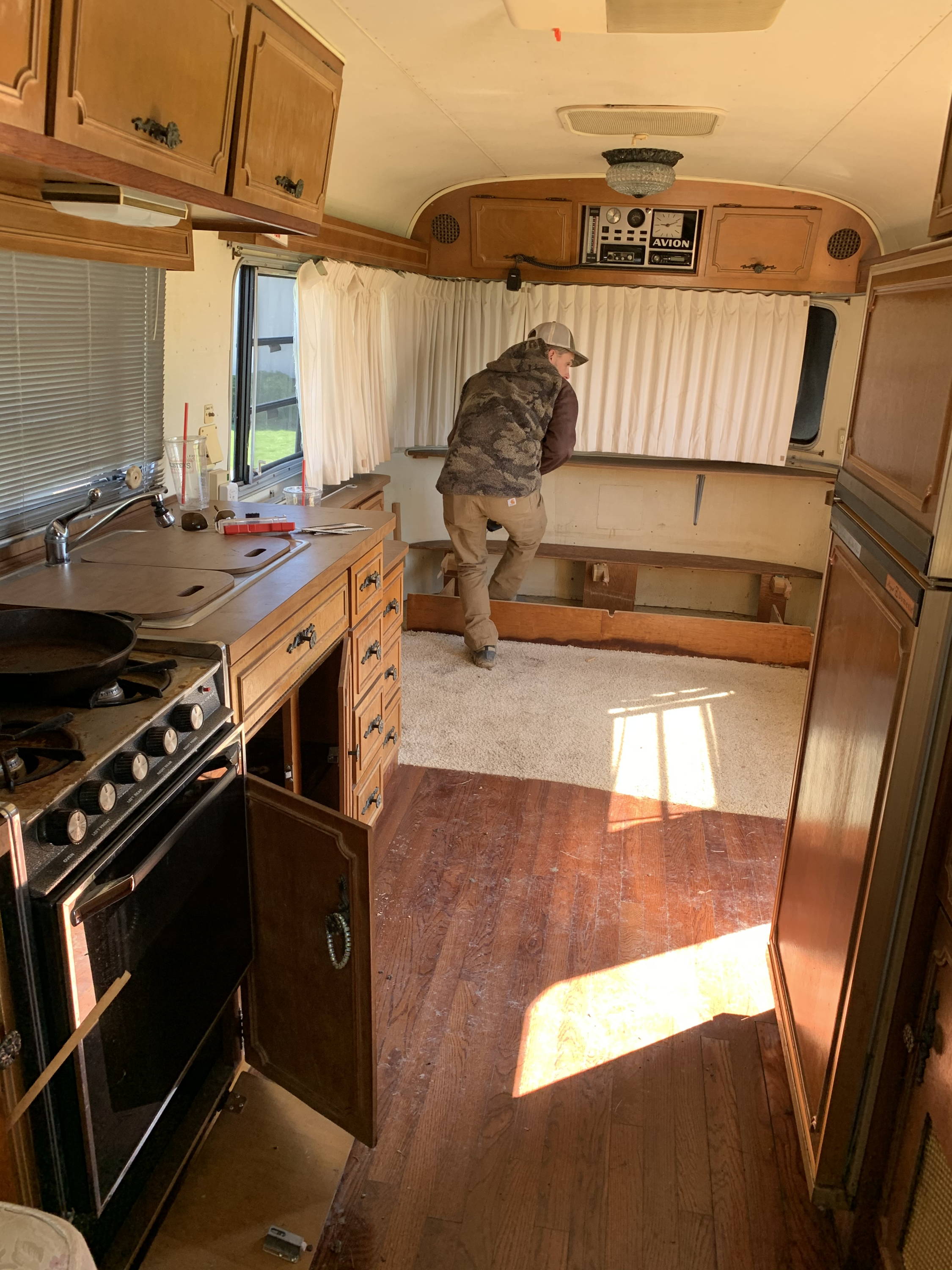 That's when the hard work started...

To make the camper fit for hauling and displaying apparel, it needed a full makeover. The inside was taken apart piece by piece until the 1978 vinyl coated aluminum walls and puke yellow linoleum were left. 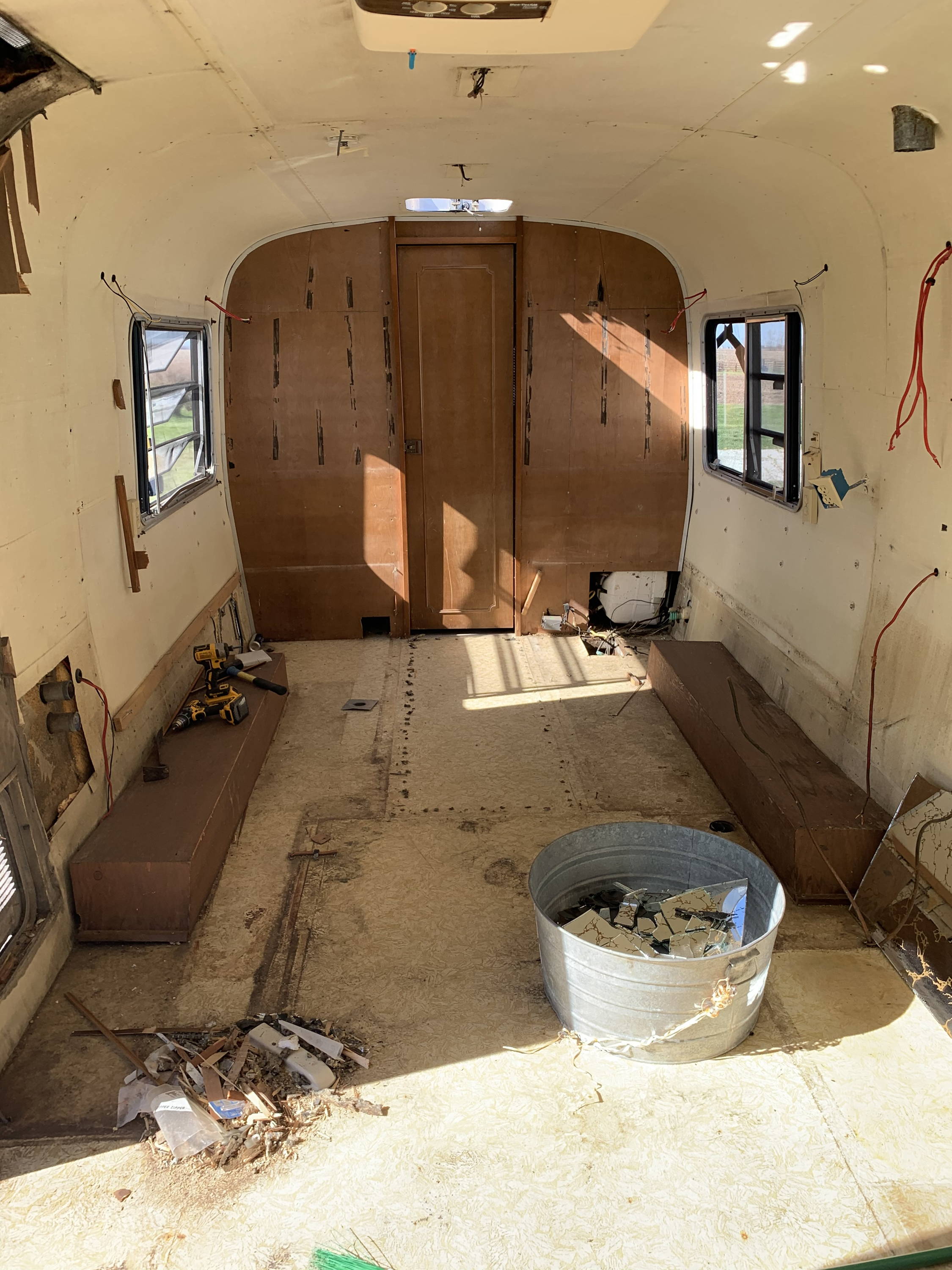 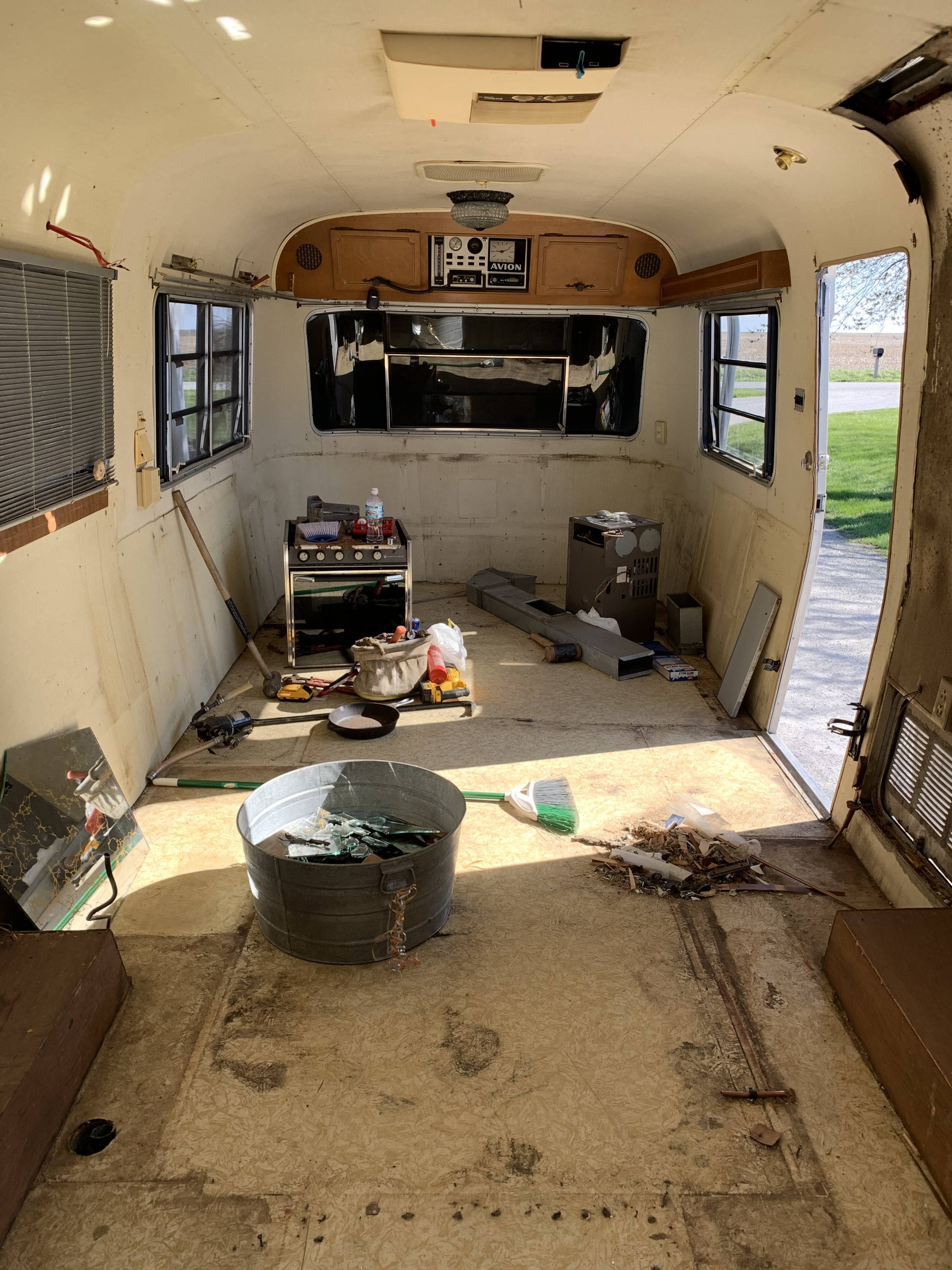 Over the course of several months... (the 2020 pandemic postponed all the markets) lots of elbow grease went into 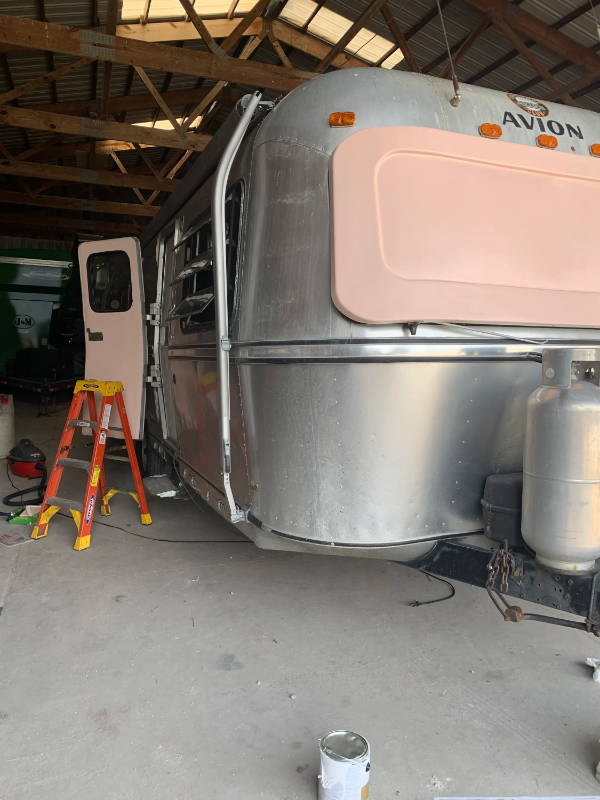 I wish I would have kept track of how many hours I spent sweating inside the Avion during the Summer of 2020. But it's probably best I didn't! And thank goodness ol' Dannie boy lead us astray that day or I never would have ended up finding this hidden gem in Missouri.

Take a look at the incredible before + after photos below to see just how far she's come! 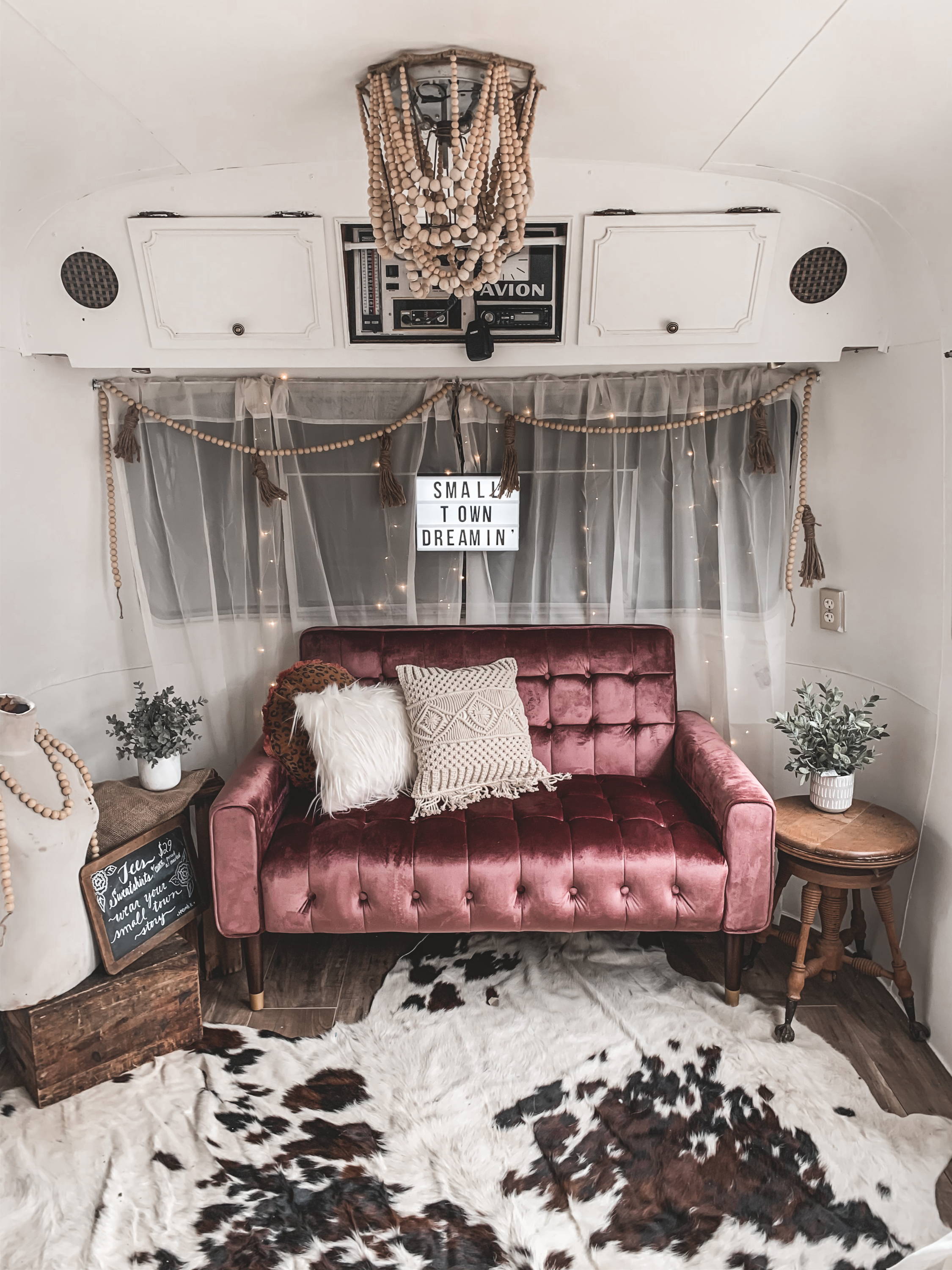 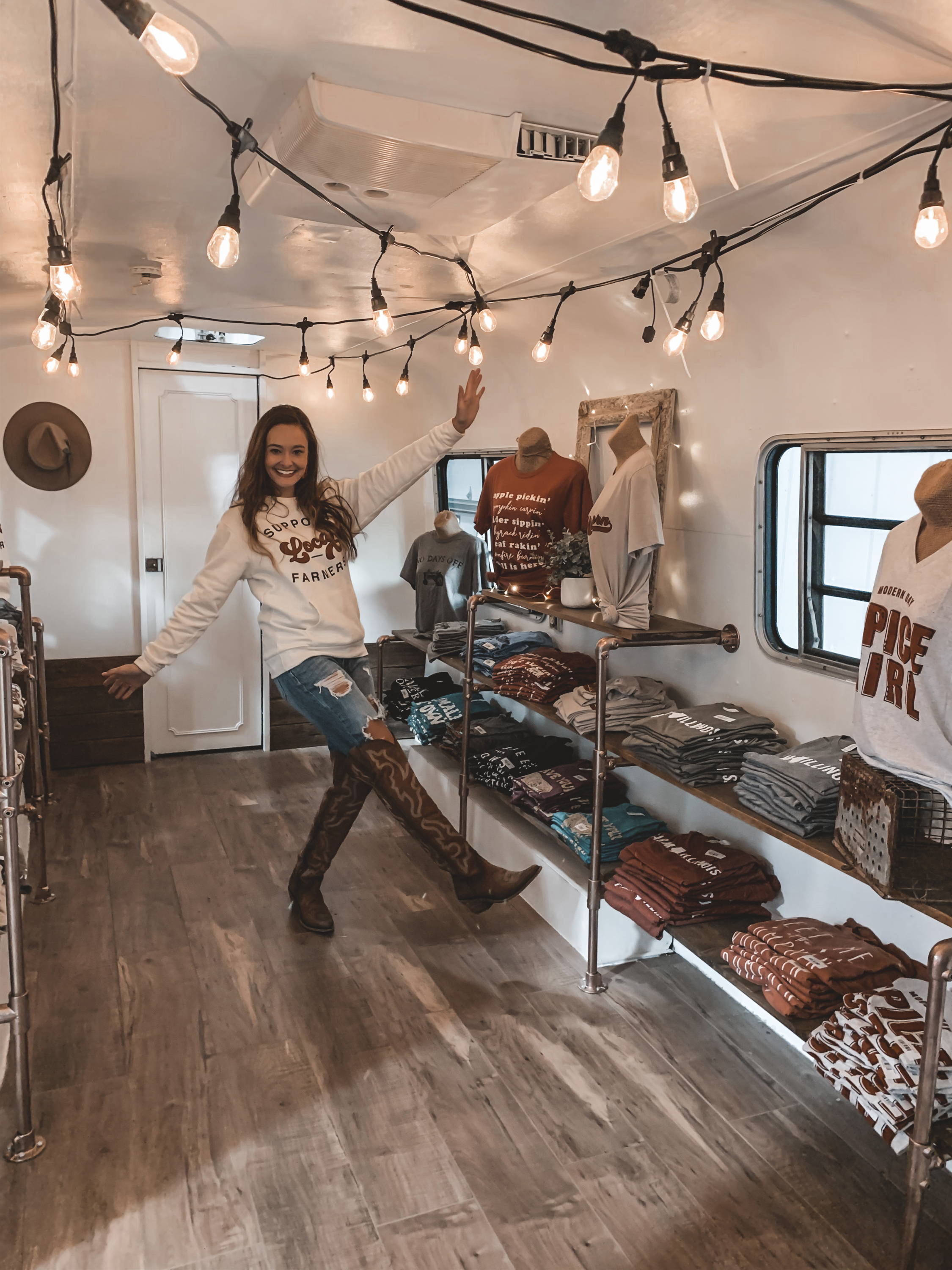 Dolly is so great and we love your shirts! You were Maddys favorite vet driving over to Canton even with her kitty Pearly in her last days and now we are loving your Small Town apparel!
Mary Wilson